In the current province of Orense, just over 7 km from the town of Bande, is the outstanding archaeological site of Baixa Limia, which includes an old Legion VII Gemina camp and a road stop (mansio). The legion had to move one of their cohorts there to take charge of the construction, maintenance and security of the Via Nova, or Via XVIII, which linked Bracara Augusta (Braga, Portugal) with Asturica Augusta (Astorga). In addition, it served to monitor and control this part of Orense, a very rich area for the interests of the Romans.

The name of the camp possibly comes from Aquis (waters) Quaequernos (a tribe in the area before the Romans’ arrival). Nearby a Roman milestone (a stone road marking) was found with an inscription that said “Aquis Quaequernos”. It is believed that the presence of hot springs in that area was decisive for a Roman infantry and cavalry garrison to settle their camp there. The Romans already knew the qualities of this type of water and did not hesitate to take advantage of all the benefits of this thermal resource.

Judging by the results of the digs, the town of Aquae would have been inhabited between 75 BC and 30 AD, and later abandoned as a camp. The mansion would remain as an inn for travellers until the Middle Ages, flourishing after the departure of the military, after a town formed around it. However, it failed to survive into the modern age as happened with other camps that became cities and towns.

At the beginning of the 1920s, an investigation of the ruins of the old town of Baños de Bande began when some prominent Galicians from Orense – Ramón Otero Pedrayo, Florentino López Cuevillas and Vicente Risco – approached the location in the company of the lawyer Farruco Pena, a native of municipality of Bande.

Under their directions, the residents of the town dug a ditch that revealed the existence of a well-constructed wall and some ceramic remains. From this moment, the site became part of the usual scholarly catalogues of the time and was even visited during a “tour” of this area by the Orense Historical and Artistic Monuments Provincial Committee in 1935. However, the outbreak of the Civil War (1936-39) put an end to any company carrying out any farther investigations during the next decade. Then, as happened in many other places, the Franco government’s plans included the construction of a reservoir in Las Conchas involving the flooding of a large part of the Limia river valley. 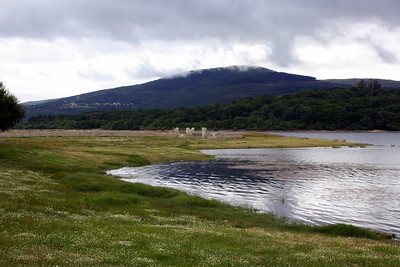 Regarding the archaeological heritage, the waters of the reservoir completely covered the site of “A Cibdade”, as well as a good part of the layout of the old Via Nova (or Via XVIII) that linked Braga and Astorga across the province of Orense. Little by little, the rich local archaeological heritage was forgotten.

The return of digging

In the 70s, after several decades of inaction, archaeological activity resumed thanks to the efforts of A. Rodríguez Colmenero. In 1975, 3 new sites were opened, which showed remains of the old Roman military compound and the town outside the walls. Work resumed in 1978 and would continue steadily during the 1980s. Then a good part of the walled enclosure – including the Porta decumana and various internal buildings (e.g. the barracks, valetudinarium and horrea) – were found. These initial investigations would also help to train numerous archaeologists and professionals in the field of Cultural Heritage.

Consolidation as a heritage reference

The 1990s marked the entry of the archaeological site into a new scientific, administrative and heritage phase. The Aquae Querquennae-Via Nova Foundation was created, promoted by Unión Fenosa, Santiago University, the Xunta de Galicia Department of Culture, the Bande City Council, the Orense Provincial Deputation and the Larouco Archaeological Group itself, which established a new framework for the management of the deposit based on notable institutional support. Also, the Via Nova Interpretation Centre and the Quarquernia Museum were opened.

At the beginning of the new century, initiatives focused on the military fortifications, alternating phases of digging with others of consolidation and restoration. As a result, the remains of buildings such as the principia (2003-2005), part of the Horrea (2006-2007) and the new barracks (2007-2008) emerged, while digs of other intramural spaces and of the same wall were performed.

As a consequence of all the initiatives, the Bande archaeological site is today one of the most intensively explored Roman military settlements in the Iberian Peninsula and one of the best known to both the general public and the specialist scientific community.