On the banks of the Limia River (Porto Quintela) and half sunk in the swamp of As Conchas is the fantastic Aquis Querquennis camp that once housed the Roman legions, which was already to build the famous road “Vía Nova“, (which linked Braga with Astorga) or to colonize these, once, wild and inhospitable lands. It was built on the years 69-79 AD. and abandoned about 120 A.D.

The total surface of our enclosure is close to 25,000 square meters, accommodating about 500 legionaries, also having an auxiliary cavalry turma.

The layout and elevation of the structures, organized in grids around the two fundamental paths, perpendicular to each other, of cardo (NS) and decumanus (EW), was made according to a common orthographic scheme, except for slight variants, with other camps of the same time. In any case, the structural assemblies to date exhumed, totally or partially, are the following: principle or headquarters, two large granaries for the storage of non-perishable food, Valetudinarium (hospital), five troop barracks, tracks and canals of drainage, in addition to a defensive system (wall with its towers, porta pincipalis, porta sinistra, left main door, porta decumana, south door, small sector of the moat and interval, or perimeter track, also called sagularis).

The total surface of our enclosure is close to 25,000 square meters, accommodating about 500 legionaries, also having an auxiliary cavalry turma.

A few meters from the camp is the road mansion. It would be the third since Braga. In it there are several rooms, which would be used to accommodate travelers who traveled the Roman route and as stables for the cavalries. An oven was also found to bake bread and a circular well. There is also a tiled lobby to access it.

Very close to the inn is a hot spring area, known as O Baño. In it there are several pools and stone bathtubs, which are vestiges of a spa that worked until the construction of the aforementioned As Conchas reservoir. In the place would be the Roman baths, but they have not yet been excavated. 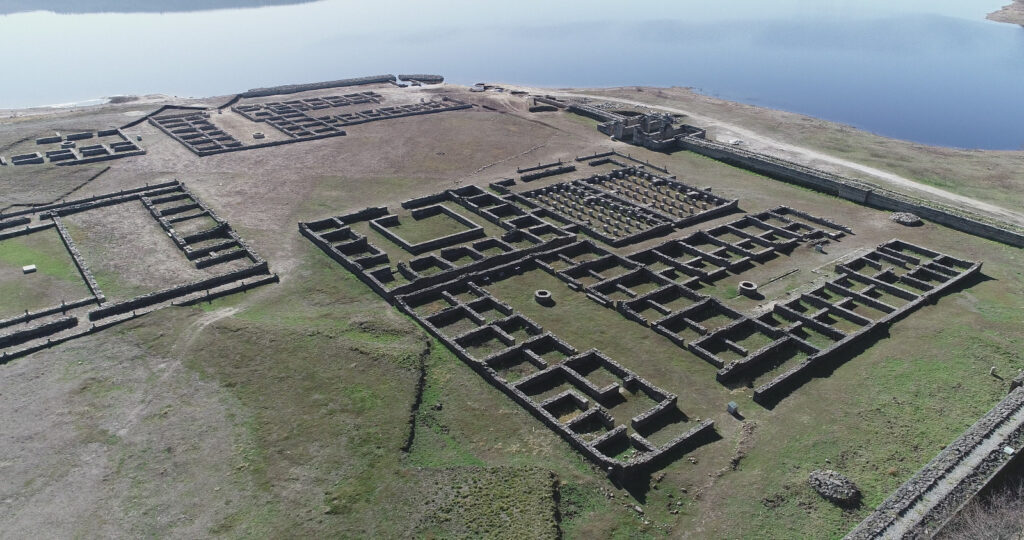